A 78-year-old woman requests evaluation of worsening dyspnea. A long-time smoker, she quit when chronic obstructive pulmonary disease (COPD) developed. At each of the last several visits, her hair had been uniformly white.

A 78-year-old woman requests evaluation of worsening dyspnea. A long-time smoker, she quit when chronic obstructive pulmonary disease (COPD) developed. At each of the last several visits, her hair had been uniformly white.

Moderately apprehensive woman who looks a bit older than her stated age. She often runs her fingers through her hair. Marked wrinkling of facial skin, especially about the lips, eyes, and chin. Several expiratory wheezes heard, but no crackles or rhonchi. Heart sounds faint but regular. Heart rate, 84 beats per minute; oxygen saturation, 84% on ambient air at rest, whereas it had ranged from 92% to 96% the year before.

A prominent seborrheic keratosis sits in a depression on the right temple. Temporalis muscle atrophy contrasts sharply with the normal habitus and facial fullness that tell us the patient is not cachectic. However, the crucial observation was that she habitually ran her fingers through one part of her hair and that this corresponded to the blond-stained portion amid the white background, almost the reverse of a white forelock (Figures 1 and 2). Because her excellent personal hygiene habits precluded consideration that dirt or excreta was the responsible "dye," she was directly challenged about whether she had resumed smoking.

Upon her admission that she had done so, antismoking interventions were undertaken. A focused workup of the dyspnea suggested smoking-related bronchospasm and mucorrhea as the chief culprits; any incipient suspicion of heart failure had receded as soon as the resumption of smoking was acknowledged.

Because no auscultatory finding can distinguish the ex-smoker from the recidivist or the continuing smoker, we rely foremost on the history. Most persons will readily acknowledge that they are still smoking, in contrast to alcohol abusers and illicit drug users.

For patients who we suspect are denying or minimizing their habit, automatic facets of the examination include verification of the telltale stale-tobacco odor that so often clings to breath, clothing, hair, and skin, and of course the "extracorporeal" sign of the pack of cigarettes in the shirt pocket.1 The "Clorets sign"1 and similar attempts to disguise the breath, although more familiar from those who seek to hide alcohol abuse, can also be employed by smokers, and foreknowledge lets us counter the move.

Our search of the literature turned up no reports of selective hair-staining as a concomitant of cigarette smoking. Perhaps this is because the requirements to identify it are narrow: the person must have the hair-stroking tic that this woman had, along with such light hair that even pale yellow-brown would stand out. We would be pleased if any reader can show us a precedent for the sign. If not, the senior author proposes the eponym Kagan sign in recognition of the physician who made the observation and correlation, took the photographs, and collaborated in the write-up. We recognize that when she smoked, this woman might have held the lit cigarette or the ashtray in such a way that the hair was stained; however, we would not ask her to smoke so that we could surreptitiously test this hypothesis!

Skin damage is so consistently exacerbated by chronic smoking that a number of reports have described a "smoker's face"2-5 that displays excess wrinkling, graying, and other features. Observers with even very modest training were able to pick out photographs of smokers from among control images of age-matched nonsmokers with similar degrees of solar exposure. Because the habit of asking about smoking when taking the history is so well-established,6 discernment of the signs of smoking is rarely required. Thus, the principal value of "smoker's face" may lie in educating smokers about it, for the desire to look one's best is widespread and may be an especially strong motivator. A single report that smoking causes premature graying of hair and balding7 may provide another tool.

One might wonder how the well-known smoking sequelae of lung disease, lung cancer, coronary artery disease, peripheral arterial disease, not to mention impotence, could fail to provide adequate motivation. Among other explanations, fear can paralyze as well as activate efforts at smoking cessation; and internal signs of smoking- induced damage are not visible to oneself or others. On the other hand, one's skin and hair are at least visible to oneself in the mirror and, absent cosmetics, dye, or wig, to the wider world as well.

Although some chest physicians describe hearing "smoker's lung sounds," and mention coarser sounds, more rhonchi, and perhaps faintness resulting from the sound-diminishing properties of overinflated lungs and of bullae, no objective study has yet shown consistent differences between the lung sounds of smokers and those of nonsmokers. One can speculate whether some of the adducing of smoker's lung represents an embodiment of the fervently held wish that every smoker would quit. An intriguing recent paper raises the question of whether a single shared susceptibility underlies both the increased incidence of COPD and the premature facial wrinkling seen in smokers.8

In cardiac examination, the most likely smoking- related sign is augmentation of the pulmonic component of the second heart sound attributable to COPD-related pulmonary hypertension. However, this finding lacks specificity because pulmonary hypertension has many other causes, and sensitivity is decreased because of the diminution of all thoracic sound by the emphysematous lung in particular. The phenomenon of emphysematous sound attenuation reaches its logical conclusion in patients whose chests are silent to the stethoscope both as to lung sounds and heart sounds, although movement and conscious interaction, as well as clear speech, confirm beyond a doubt that both respiration and circulation are proceeding!

An intriguing report lends yet another dimension, as the authors describe changes in the nicotine staining of nails that corroborated a history of smoking cessation.9

PUSHING THE ENVELOPE OF OBSERVATION

Several other findings in the accompanying images are described above or provided in the captions. These are clearly subordinate, but any could be of great importance--for instance, if the temple nodule were a melanoma--and any reader who spotted other abnormalities will have accomplished something akin to the open-ended process of diagnosis: neither a matter of multiple choice nor of finding only those processes that are life-threatening, but of taking the dauntingly large potential "data set" of any human being and distilling out an accurate description and discriminating differential diagnosis. In this realm, it would come as no surprise if a reader spotted a finding missed by the authors. 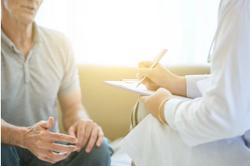