Migraine with aura (MwA) may be an independent risk factor for atrial fibrillation (AF) in both men and women, particularly among those aged <55 years, according to findings from a recent study that used a novel artificial intelligence (AI)-enabled electrocardiogram (ECG) AF prediction model.

Study investigators from the Mayo Clinic, writing in the journal Headache, suggest also that AF-mediated cardioembolism may play a role in the observed association between migraine and stroke.

As context for their research, study authors point to longitudinal cohort study data that show patients with MwA are at greater risk of developing AF than those with MwoA. However, they note, “Few studies have specifically investigated the risk of [AFib] in patients with migraine in different age and sex groups.”

The study’s primary objective was, using a novel artificial intelligence-enabled electrocardiogram (AI-ECG) AF prediction algorithm developed at Mayo Cardiology, to evaluate the differential risk of undetected paroxysmal AF in persons with migraine with and without aura and with ECGs with normal sinus rhythm (NSR).

For the cross-sectional study, lead author Peter Noseworthy, MD, professor of medicine, consultant, division of heart rhythm services, department of cardiovascular medicine, Mayo Clinic, Rochester, MN, and colleagues identified adult patients at the Mayo Clinic with a diagnosis of MwA or MwoA and at least one ECG with NSR within the past 20 years. The ECG with the highest AF prediction model output was used as the index ECG for each patient.

The researchers conducted comparisons between MwA and MwoA for the entire cohort, for women only and men only, and for 4 age groups (18 to <35, 35 to <55, 55 to <75, ≥75 years). Multivariable adjustments were made for age, sex, and 6 common vascular comorbidities associated with increased risk for AF.

After adjustment for vascular comorbidities, the difference between MwA and MwoA remained significant for:

Chiang et al wrote in conclusion that using, “a novel AI-enabled ECG algorithm on a large number of patients with migraine, we demonstrated that patients with MwA have a significantly higher [AFib] prediction model output, suggesting a higher risk of subclinical, paroxysmal [AFib] compared to MwoA.”

Further, they wrote, the data suggest that AF may mediate the significantly greater risk of ischemic stroke observed in persons with MwA.

Food Insecurity Rose among US Adults with Cardiovascular Disease, According to National Study 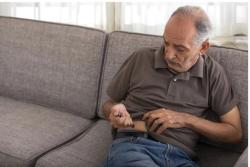 FDA Recall Announced for Atenolol, Clopidogrel based on Labeling Mix-up