For the first time, the USPSTF recommends colorectal cancer screening in adults beginning at age 45.

Adults should be screened for colorectal cancer beginning at age 45, according to a new draft recommendation by the US Preventive Services Task Force (USPSTF).

USPSTF Grades and Suggestions for Practice:

→Grade A
The USPSTF recommends the service.
There is high certainty that the net benefit is substantial.

→Grade C
The USPSTF recommends selectively offering or providing this service to individual patients based on professional judgment and patient preferences.
There is at least moderate certainty that the net benefit is small.

“Unfortunately, not enough people in the US receive this effective preventive service that has been proven to save lives,” said USPSTF Chair Alex Krist, MD, MPH, professor of family medicine and population health, Virginia Commonwealth University, in a USPSTF press release. “We hope that this recommendation to screen people ages 45 to 75 for colorectal cancer will encourage more screening and reduce people's risk of dying from this disease.”

Black adults have the highest incidence of and mortality from colorectal cancer vs other populations, according to the draft recommendation. Because of this, the USPSTF draft recommendation particularly encourages clinicians to offer recommended screening to their Black patients beginning at age 45.

“New science about colorectal cancer in younger people has enabled us to expand our recommendation to screen all adults starting at age 45, especially Black adults who are more likely to die from this disease,” said USPSTF member Michael Barry, MD, director of the Informed Medical Decisions Program, Massachusetts General Hospital, in the same press release.

In addition, the USPSTF recommends direct visualization tests and stool-based tests to screen for colorectal cancer. The draft recommendation does not include serum tests, urine tests, or capsule endoscopy.

“There are many tests available that can effectively screen for colorectal cancer,” said Martha Kubik, PhD, RN, USPSTF member, in the same press release. “We urge primary care clinicians to discuss the pros and cons of the various recommended options with their patients to help decide which test is best for each person.” 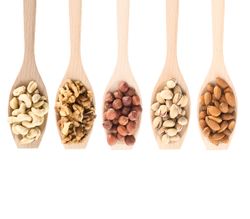 A Nutty Way to Prevent Cancer?