A 58-year-old man sought medical attention because of the recent sudden onset of blurred vision in his left eye. His vision had not improved over several days. The patient had hypertension and had recently sustained a myocardial infarction. He was taking metoprolol, 25 mg/d, and aspirin, 81 mg/d.

A 58-year-old man sought medical attention because of the recent sudden onset of blurred vision in his left eye. His vision had not improved over several days. The patient had hypertension and had recently sustained a myocardial infarction. He was taking metoprolol, 25 mg/d, and aspirin, 81 mg/d.

His best-corrected visual acuity was 20/30 in the right eye and 20/80 in the left eye. No afferent pupillary defect was noted. Biomicroscopy revealed early nuclear sclerotic cataracts.

Results of the funduscopic examination of the right eye were unremarkable. The fundus of the left eye showed dot, blot, and flame-shaped hemorrhages throughout, including the macula. The macular reflex was blunted, and the macula appeared edematous. The retinal veins were engorged and tortuous. No evidence of ischemia (cotton-wool spots) was seen. Because the central retinal vein occlusion (CRVO) had occurred recently, the optic nerve head also appeared edematous. The patient’s blood pressure was normal. Bilateral carotid artery bruits were audible with auscultation. The patient was referred to his internist for further workup.

CRVO is caused by localized thrombosis at the level of the lamina cribrosa of the optic nerve. Intra-retinal hemorrhages are visible throughout the fundus grounds in patients with CRVO. Cotton-wool spots and an afferent pupillary defect are signs of ischemia. Poor initial visual acuity also correlates with the degree of ischemia. If ischemia is present initially or occurs over time, neovascularization of the retina and iris (rubeosis) may develop. This can lead to neovascular glaucoma, severe eye pain, and further loss of vision.

The management of CRVO includes strict control of arterial blood pressure, hypercholesterolemia, and cardiovascular risk factors. Patients need to be monitored monthly by an ophthalmologist for the possible development of neovascularization.

A 76-year-old man presented for an annual eye examination; his only complaint was that he had some difficulty in reading fine print. He was pseudophakic in both eyes. He had hypertension, hyperlipidemia, type 2 diabetes mellitus, and moderate obesity.

His best-corrected visual acuity was 20/20 in each eye. Intraocular pressures were normal. There was no afferent pupillary defect. The funduscopic examination of the right eye identified dot and blot intraretinal hemorrhages extending from the optic disc into the supranasal quadrant (A). A red-free photograph helps show the extent of the hemorrhages by increasing fundus contrast (B). No diabetic retinopathy was noted.

Branch retinal vein occlusions (BRVOs) result from localized thrombosis inside a single retinal vein. BRVOs occur at sites of arteriovenous crossing, where the artery and vein share a common adventitial sheath. The artery causes compression or deformation of the vein, which leads to the formation of thrombi. BRVOs that do not affect the macula can be asymptomatic, as in this patient.

The management of a BRVO is the same as that of a central retinal vein occlusion. This patient was referred back to his internist. The patient is being monitored monthly with dilated eye examinations to identify any ischemic neovascular development.

The patient’s best-corrected visual acuity was 20/50 in the right eye and 20/200 in the left eye. She had some early nuclear sclerotic cataracts. The funduscopic examination of the left eye showed dot, blot, and flameshaped hemorrhages covering the complete inferior half of the retina. The macula was also involved. No cotton-wool spots were visible. Carotid artery auscultation revealed an audible bruit on the left side.

A hemicentral retinal vein occlusion (HCRVO) was diagnosed. In these rare presentations, there is a thrombus in 1 major trunk of the central retinal vein in the optic nerve. The thrombus usually occurs at the level of the lamina cribrosa in the anterior part of the optic disc, where the 2 trunks have not yet joined.

The risk factors for HCRVO are similar to those for central retinal vein occlusion (CRVO). They include diabetes, hypertension, older age, dyslipidemia, and smoking. Ischemia and neovascular glaucoma can develop in patients with HCRVO. They should be monitored as carefully as patients with CRVO.

This patient’s erythrocyte sedimentation rate, blood glucose level, and blood pressure were normal. A carotid duplex ultrasound study and an internal medicine consultation were scheduled for her.

An 81-year-old man noticed a sudden painless loss of vision in his right eye. His vision had been relatively good up to this point, ever since he had his cataracts removed 5 years earlier.

He had mild hypertension for which he was taking hydrochlorothiazide. His other medications were aspirin, 81 mg/d, and a daily multivitamin supplement. His previous eye examination 1 year earlier was unremarkable except for bilateral pseudophakia.

Visual acuity was 20/100 in the right eye and 20/25 in the left eye. There was no afferent pupillary defect. The rest of his ocular examination was unremarkable except for the dilated funduscopic evaluation of the right eye. This showed a wedge-shaped area of intraretinal hemorrhages extending peripherally from a junction of a branch retinal artery that crossed over a corresponding branch retinal vein. The hemorrhages involved the macula. Numerous yellow-white lesions (cotton-wool spots) were present in the superficial retina.

This patient had a branch retinal vein occlusion. Because the macula was involved, his vision was significantly decreased. The cotton-wool spots are coagulated exudates of plasma and fibrin; they represent focal areas of hypoxia and are signs of retinal ischemia. Patients with cotton-wool spots need to be monitored closely (every month until the lesions resolve) because they are at increased risk for retinal neovascularization.

Patients with macular involvement are usually observed for 3 months to see whether the macular hemorrhages and edema resolve on their own. If macular edema persists after this period, focal laser treatment may be indicated.

This patient’s blood pressure was elevated (142/92 mm Hg). He was referred back to his family physician for reevaluation of his antihypertensive therapy. He is being monitored monthly with ophthalmological examinations.

A 66-year-old man presented with loss of vision in his right eye. He also complained of severe achy pain in and around the eye. The pain “felt like a toothache” and had developed gradually over several days.

One year earlier the patient had sustained a central retinal vein occlusion (CRVO) in his right eye. Because the CRVO was ischemic, he had undergone several sessions of panretinal laser photocoagulation. His vision remained impaired after the CRVO episode.

The patient had type 2 diabetes mellitus, hypertension, and hypercholesterolemia. He had been a smoker for more than 40 years but quit smoking 3 years earlier. His medical history included a myocardial infarction and cardiac bypass surgery.

The patient had no light perception in the right eye. Visual acuity was 20/30 in the left eye.

The episcleral vessels were dilated in the right eye. On slit lamp examination the iris showed florid neovascularization (rubeosis). This was confirmed with gonioscopy, which is used to evaluate the anterior chamber angle. The patient had a mature white cataract in his right eye and had some early nuclear sclerosis in his left eye. He also had an afferent pupillary defect in the right eye. His intraocular pressure was 58 mm Hg in the right eye and 23 mm Hg in the left eye. The back of the right eye was not visible because of the dense cataract. The left fundus appeared normal except for narrowing of the retinal arteries and arteriovenous nicking.

This patient was treated with medical therapy; topical corticosteroids and atropine sulfate 1% were prescribed to decrease pain and inflammation. A topical Î²-blocker (timolol 0.5%), a topical Î±-agonist (brimonidine tartrate 0.2%), and a topical carbonic anhydrase inhibitor (dorzolamide 2%) were also prescribed. He was told to use all these eye drops in his right eye only.

The patient’s general medical status was stable because he had seen his cardiologist 2 days before his ophthalmological visit. 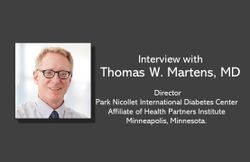 CGM vs SMBG in Primary Care: What Does the T2D Evidence Say?