An 85-year-old man presented with intermittent abdominal pain of several years’ duration. Two years earlier, he underwent a laparoscopic cholecystectomy that was converted to an open procedure.

An 85-year-old man presented with intermittent abdominal pain of several years’ duration. Two years earlier, he underwent a laparoscopic cholecystectomy that was converted to an open procedure. A CT scan performed a year after surgery yielded normal findings. The physical examination revealed an oozing mass that had been present for 3 weeks along the periumbilical area (A). Barium swallow and endoscopic examination results were unremarkable. A CT scan demonstrated multiple abdominal masses with invasion into the pancreas (B). A biopsy of the node disclosed areas of squamous cell carcinoma and adenocarcinoma; the periumbilical mass was a Sister Mary Joseph nodule. Immunohistochemistry stains demonstrated cytokeratin 7 and carcinoembryonic antigen. No clear primary source of the malignancy was discovered; the differential diagnosis included malignancy from the pancreas, colon, and bile duct. Drs Manny C. Katsetos and Steven V. Angus of Farmington, Conn, write that Sister Mary Joseph nodule is named after Dr William Mayo’s assistant who became the superintendent of Saint Mary’s Hospital in Rochester, Minn, in 1892.l During the preoperative preparation of patients, she noted that indurated nodules along the periumbilical area were associated with advanced intra-abdominal malignancy. The nodule generally portends a poor prognosis. In one study, patients survived an average of 11 months after umbilical metastasis appeared; the nodule was the presenting symptom of malignancy in nearly 50% of patients.2 The primary tumor is identified in about 9% to 17% of metastatic nodules to the umbilicus.3,4 Because of the extent of the disease and the poor prognosis, this patient was given palliative chemotherapy. He died 3 months later. 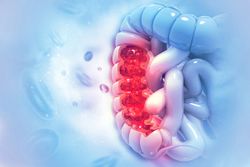