The ruling means states will govern abortion rules, which could lead to abortion being outlawed in half the country, according to one organization that advocates for reproductive rights.

On June 24, the Supreme Court issued 213 pages with its ruling and opinions in the case known as Dobbs v Jackson Women’s Health Organization, which the court heard on December 1, 2021. The Supreme Court considered the state of Mississippi’s appeal of a lower court ruling that struck down as unconstitutional the state’s law banning abortion after 15 weeks of pregnancy, according to the Center for Reproductive Rights (CRR).

A summary in the ruling syllabus stated: “The Constitution does not confer a right to abortion; Roe and Casey are overruled; and the authority to regulate abortion is returned to the people and their elected representatives.”

The ruling also referred to the 1992 case Planned Parenthood of Southeastern PA v Casey, another landmark case in US abortion law.

“We hold that Roe and Casey must be overruled,” the ruling said. “The Constitution makes no reference to abortion, and no such right is implicitly protected by any constitutional provision, including the one on which the defenders of Roe and Casey now chiefly rely—the Due Process Clause of the Fourteenth Amendment.”

“The Constitution makes no reference to abortion, and no such right is implicitly protected by any constitutional provision, including the one on which the defenders of Roe and Casey now chiefly rely—the Due Process Clause of the Fourteenth Amendment.”

Citing case law, the draft ruling said the Due Process Clause “has been held to guarantee some rights that are not mentioned in the Constitution, but any such right must be ‘deeply rooted in this Nation’s history and tradition’ and ‘implicit in the concept of ordered liberty.’

“The right to abortion does not fall within this category,” the draft ruling said.

A 98-page draft by Justice Samuel Alito circulated to fellow justices on February 10th. That document was leaked to the news site Politico, which published the ruling on May 2, sparking a firestorm of reaction and demonstrations from abortion supporters and opponents.

At the state level

Based on the ruling, at least half the 50 states are poised to ban abortion, according to CRR.

That organization called Dobbs v Jackson Women’s Health “the most consequential abortion rights case in generations” and analyzed the various state laws that regulate abortion in the study, “What If Roe Fell?”

CRR categorized the states, the District of Columbia and the five most populous U.S. territories in four ways, based on analysis of current laws in a post-Roe legal environment:

That group said the figures showed a reversal of a long-term decline in US abortions that began about 1990, but noted trends varied across states from 2017 to 2020 with “no clear patterns to explain why some had increases or decreases.”

The Guttmacher Institute map of states that will or are likely to ban abortion generally matched that of the Center for Reproductive Rights.

Since the May 2 publication of the draft ruling, physician groups have lined up in support of abortion rights, publishing statements and member advisories.

In its annual meeting June 10-15, before the Supreme Court ruling, the American Medical Association (AMA) members adopted a policy “recognizing that it is a violation of human rights when government intrudes into medicine and impedes access to safe, evidence-based reproductive health services, including abortion and contraception.”

“A growing number of current and pending laws insert government into the patient-physician relationship by dictating limits or bans on reproductive health services and while also aiming to criminally punish patients for their health decisions,” AMA President Jack Resneck Jr, MD, said in a published statement.

This month, outgoing AMA President Gerald E. Harmon did not mention the Supreme Court, but noted “increased government interference in the patient-physician relationship and the practice of medicine,” in his address to AMA’s annual meeting.

“Whether the issue is women’s reproductive health, care for transgender persons, or appropriate treatments for COVID … the AMA demands that politicians get out of the exam room,” Harmon said in his speech. 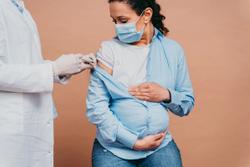