There is emergent need to improve recognition and management of COPD in HIV-infected patients. Details here.

Patients infected with HIV should be screened regularly for COPD--which often goes unrecognized in this population, according to a new study.

“The prevalence of COPD among HIV-infected patients is high and largely undiagnosed,” state the authors, led by Karine Risso, MD, from the Centre Hospitalier Universitaire de Nice in France.

Despite efficient highly active anti-retroviral therapy (HAART), respiratory morbidity remains high among HIV-infected patients. Involvement of COPD has been suggested in recent years, but COPD studies in this population are fairly rare.

Risso and colleagues conducted a cross-sectional study among 581 HIV-infected outpatients (average age 48 years) who presented to a University Hospital Center in France during a single year. The researchers established the prevalence of COPD by taking lung function measurements with a hand-held spirometer. They also evaluated independent COPD risk factors and identified disease predictive factors.

The prevalence of COPD was 9%. Notably, three-quarters of the patients with COPD ignored their diagnosis, the researchers state.

A multivariate analysis showed that two factors increased the risk of COPD: age (OR, 1.61) and smoking history (OR, 1.28). Body mass index (BMI) and CD4 cell count were also negatively associated with COPD.

The researchers identified 6 factors that they consider to be highly predictive of COPD among HIV patients, and which increase risk by 2 to 4 times:

The researchers state that “in addition to already known risk factors including age and smoking, low CD4 cell count was associated with COPD.”

Further studies are required to understand the implications of CD4 cell count in COPD pathogenesis. “However, this study underlined an emergency to improve COPD management among this population.”

The authors suggest that physicians can use the 6 simple parameters defining high-risk patients to identify HIV patients at risk for COPD.

The researchers presented their results at the 54th Interscience Conference on Antimicrobial Agents and Chemotherapy. 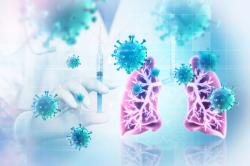