When diagnosing vitamin B12 deficiency, we routinely include a measurement of the methylmalonic acid (MMA) level in all patients whose B12 values are under 400 pg/mL. An elevated MMA level confirms B12 deficiency.

When diagnosing vitamin B12 deficiency, we routinely include a measurement of the methylmalonic acid (MMA) level in all patients whose B12 values are under 400 pg/mL. An elevated MMA level confirms B12 deficiency.

Recently, I have noticed that many of my colleagues measure the homocysteine level instead of the MMA level in this setting. I was under the impression that homocysteine levels were less accurate and more nonspecific for vitamin B12 deficiency. Could you please comment?

The specificity of MMA elevation for B12 deficiency is superior to that of the homocysteine level, which is affected by folate and other vitamins as well as by renal status, certain drugs, genetic mutations and polymorphisms, alcohol abuse, life style and demographic characteristics, and other factors. MMA levels also have fewer preanalytic sources of error, whereas homocysteine levels become spurious when serum is used instead of plasma or when centrifugation of the blood sample is delayed. Nevertheless, MMA specificity is imperfect; there are several known causes of falsely abnormal MMA levels (such as renal insufficiency) and surely some still unknown causes as well. However, it is the complexity and high cost of the MMA assay that have chiefly limited its wider clinical use.

That said, your practice of routinely measuring MMA levels in all patients with a B12 value below 400 pg/mL also deserves comment because it is controversial. The MMA assay is too expensive and the diagnostic value it offers insufficient for such routine use. Patients with clinical findings typical of B12 deficiency (eg, megaloblastic anemia) rarely need further biochemical proof beyond their low B12 level; a better use of diagnostic resources in such cases would be to determine which disease process produced the B12 deficiency (eg, pernicious anemia, which involves loss of intrinsic factor). Reserve MMA testing for patients with a disparity between clinical findings and B12 levels (in either direction) or for the definitive exclusion of B12 deficiency in patients with an atypical clinical picture before other diagnoses are pursued (20% to 30% of B12 levels below 250 pg/mL are falsely low).1,2

Routine further testing in patients with B12 levels as high as 400 pg/mL when the accepted definition of low B12 levels is less than 250 pg/mL is inadvisable. The idea was advocated by some experts after surveys found mild MMA or homocysteine elevations in about 30% of mostly healthy elderly persons with "low-normal" B12 levels (primarily in the range of 250 to 350 pg/mL; cut points of 400 pg/mL were rarely used).1 The practical and medical shortcomings of such a wholesale redefinition of suspect B12 levels are many:

• B12 deficiency is not the sole cause of isolated MMA or homocysteine elevation (in persons with a normal B12 level).
• The redefinition would nearly quadruple the clinical caseload because more than one-third of all American adults have B12 levels below 350 or 400 pg/mL, according to the latest National Health and Nutritional Examination Survey, whereas only 8% to 13% have levels below 250 pg/mL.3
• Such a caseload increase seems wasteful because at least 60% to 70% of those patients with low-normal B12 levels (250 to 350 pg/mL) have completely normal B12 status on metabolic testing.1,2
• Still worse, of the 30% who do turn out to have mild MMA or homocysteine changes, very few have any clinical evidence of deficiency, the mild biochemical changes often revert spontaneously, the clinical course is unknown, and clinical benefits from treating most of them with B12 have yet to be proved.

Routine attention to patients with B12 levels above the accepted 250 pg/mL cut point for B12 deficiency therefore has unproven clinical or preventive value. Clinicians are better served by focusing rigorous diagnostic attention on all patients with B12 levels below 250 pg/mL (including an MMA assay when necessary), and always with determination of the underlying cause of deficiency because of its important management and prognostic implications. At the same time, they should not ignore the rare patient with clinical signs of B12 deficiency and a B12 level of more than 250 pg/mL. 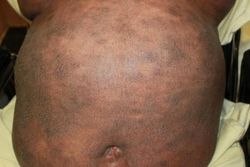 If RLS Is Presumed, Order a Serum Ferritin Level