Gout is associated with a 57% increased risk of ESRD, independent of hypertension and diabetes, according to new research.

The association between gout and both hypertension and diabetes is well established. There has been less evidence linking gout with chronic kidney disease (CKD) as an independent risk factor, however.

My colleagues and I recently published a study in Arthritis Research & Therapy; we drew on a large national database in Taiwan, where the prevalence and incidence of end-stage renal disease (ESRD) are alarmingly high. We found that gout is associated with a 57% increased risk of ESRD, independent of hypertension and diabetes.1 Among residents of Taiwan who have neither hypertension nor diabetes, the presence of gout confers a 2-fold increased risk of ESRD. Our study points out the need for physicians to routinely monitor kidney function in patients with gout.

Here are key findings about that study.

What motivated your team to study this problem in Taiwan?
First, gout is a major health problem in Taiwan, where the prevalence is as high as 3.8% in those older than 20 years. This is much higher than in the surrounding countries. Second, tophaceous gout is quite common in Taiwan. Many of our patients with gout have comorbidities, such as tophus deposition, kidney stones, chronic kidney disease, hypertension, and other cardiovascular and metabolic diseases. This disease pattern does not fit the traditional pattern. This may be because we see patients in a tertiary teaching hospital. We therefore used a database for our research that is genuinely representative of the general population.

Are your results substantially different from those in a recent report2 about the same issue in US patients?
Our research used a dataset of 1,000,000 people systematically sampled in 2000. Compared with the NHANES population studied in the referenced report,2 the mean age is somewhat younger in the Taiwan database (42 vs 47 years), although the sex ratio is similar. Gout prevalence is similar in Taiwan (3.8%) and the US (3.9%). For gout patients, the prevalence of hypertension (42.5% vs 74%) and diabetes mellitus (17.1% vs 26%) is lower in Taiwan. However, the background prevalence of hypertension (8.9% vs 28.9%) and diabetes (4.0% vs 7.8%) is markedly lower than the US. The age- and sex-adjusted odds ratios for hypertension and diabetes are even higher in gout patients in Taiwan than in the US. However, the prevalence of coronary artery disease/myocardial infarction is quite similar in both countries (13.7% in Taiwan and 14.4% in the US).

Note that the diagnoses in our studies are based on ICD-9 code given by physicians, while the NHANES is based on patient report. Collectively, both reports confirm that gout patients have high risks of cardiovascular and metabolic diseases-regardless of background risk.

So the prevalence of gout is very similar in the US and in Taiwan. Are there dietary differences between the American and Taiwanese populations that might have an impact on gout and its comorbidities?

We do not have direct data comparing diet in the US and Taiwan. In general, Taiwanese people tend to ingest less red meat, alcohol, and salt. All these are risk factors for gout, and for cardiovascular and metabolic diseases. If dietary factors have a similar impact on the prevalence of gout, hypertension, and diabetes, the fact that the gout prevalence is similar but hypertension and diabetes prevalence is markedly lower suggests that dietary factors cannot explain the differing gout comorbidities. Taiwanese people probably are genetically prone to gout.

What is the learning message from your study, and do you think it will apply to populations outside Taiwan?

We have long known that gout is often associated with cardiovascular and metabolic risk factors. However, gout itself is overlooked as an independent risk factor for cardiovascular diseases. Only recently a high risk of acute MI in gout patients has been observed in the MRFIT study3 in 2006 and a report by De Vera and coworkers4 in 2010. However, the MRFIT study focused on high-risk patients (patients with a Framingham risk score in the upper 15% band) and De Vera and colleagues selected patients older than 65 years. In addition, data in women with gout are limited.4 Similarly, gout is also overlooked as a separate risk factor for CKD and subsequent ESRD.

Key point: Our study reinforces findings that gout is an independent risk factor for acute MI and chronic kidney disease. Because we used a representative sample from the general population (ie, those older than 20 years), we generalize this concept to gout patients at young ages and to those who do not yet have traditional cardiovascular risk factors. Therefore, gout patients should receive careful motoring-regardless of their age, because gout often has its onset in young adulthood. 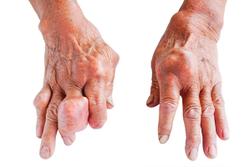