A straightforward discussion drove toward attendees toward the more current understanding of the clinical and genetic overlap between the 2 major forms of IBD.

The classic differential diagnosis of inflammatory bowel disease (IBD), a review of the clinical presentation, the endoscopic appearance, and the pathology were the topics of a presentation at 2012 Advances in Inflammatory Bowel Diseases, the Crohn’s & Colitis Foundation’s Clinical & Research Conference, in Hollywood, Florida.

Mark Osterman, MD, MSCE, from the University of Pennsylvania in Philadelphia, provided a straightforward discussion that drove attendees toward the more current understanding of the clinical and genetic overlap between the 2 major forms of IBD and the need for further research to better distinguish them.

Dr Osterman noted that ulcerative colitis is classically described as having the following characteristics:

• Involvement of the colon only, beginning in the rectum and extending proximally in a continuous fashion.

• Typical ulcerative colitis pathology: Inflammation is confined to the mucosa and submucosa, with cryptitis and/or crypt abscesses, and crypt architectural distortion.

In contrast, Crohn disease is classically described as having the following characteristics:

• Inflammation in discontinuous segments of the GI tract, from the mouth to the anus, sparing the rectum (“skip” lesions).

Dr Osterman touched on the diagnosis of the comparatively benign and often self-limited syndrome of microscopic colitis, where colonoscopy is normal but microscopic examination shows epithelial injury, with flattening and mucin depletion and increased intraepithelial lymphocytes or subepithelial collagen banding.

After describing the diseases’ usual presentations, Dr Osterman pointed out the following problems and exceptions to these simple distinctions between ulcerative colitis and Crohn disease:

• Discontinuous disease is not seen only in Crohn disease-it may be seen in untreated ulcerative colitis as well.

• Rectal “sparing” may be relative: Some patients with Crohn disease have some rectal inflammation but much less than is being seen elsewhere in the bowel. Conversely, rectal sparing may occur in untreated ulcerative colitis.

• Transmural inflammation may be seen in fulminant ulcerative colitis, if fissuring ulcers develop.

• Superficial inflammation does not always mean ulcerative colitis; it is sometimes seen in Crohn disease as well.

• Aphthous ulcers are not confined to Crohn disease, where they are more common.  They also are found in 17% of ulcerative colitis colectomy specimens.

• Up to 25% of patients with ulcerative colitis may have skin tags.

These points provided attendees withd a more nuanced and complex understanding of the differential diagnosis.

Given the ambiguities in diagnosis, Dr Osterman suggested that antibody serologies may eventually play a larger role distinguishing ulcerative colitis from Crohn disease. 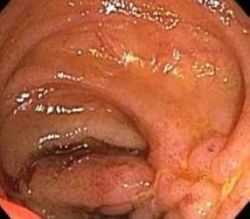 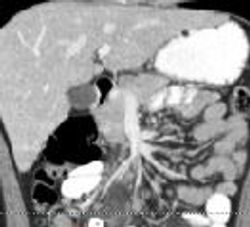 Lower Quadrant Pain and Emesis in a Young Boy 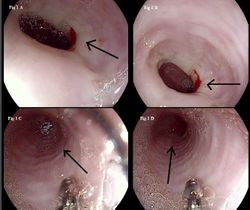