ATS 2022: A fixed dose SABA/corticosteroid combination reduced risk of exacerbation by 27% vs SABA alone in the MANDALA study.

A novel fixed dose combination of albuterol and budesonide used as needed by patients with uncontrolled moderate to severe asthma more effectively reduced the risk of a severe disease exacerbation when compared with albuterol alone.

Specifically, the short-acting beta2-agonist (SABA) and corticosteroid combination (PT027, AstraZeneca) when used as rescue medication significantly reduced the risk of severe asthma exacerbation by 27% when compared with albuterol monotherapy.

The data, from the MANDALA phase 3 clinical trial, were simultaneously published in the New England Journal of Medicine and presented at the American Thoracic Society 2022 International Conference, held in San Francisco. May 13-18, 2022.

SABA, the traditional rescue therapy for worsening asthma symptoms, do not address airway inflammation, a central feature of asthma and exacerbations, write study authors, led by Alberto Papi, MD, professor of respiratory medicine and director of respiratory diseases at the University of Ferrara, Italy. The inflammatory cascade, left unchecked, leaves patients at risk for a severe disease episode, for more frequent exacerbations, hospitalization, and frequent use of oral corticosteroids (OCS). The latter, the authors emphasize, with as few as 1-2 short courses, are associated with a wide range of adverse health conditions.

The MANDALA authors hypothesize that the addition of a corticosteroid to SABA rescue treatment could reduce the risk of severe exacerbations and so also the need for OCS.

MANDALA was a multinational phase 3 randomized controlled event-driven trial designed to investigate the efficacy and safety of albuterol-budesonide compared with albuterol alone as rescue medication in patients with uncontrolled, moderate to severe asthma.

Papi and colleagues enrolled adults and adolescents (aged ≥12 years) and children (aged 4–11 years) with symptomatic asthma and at least 1 severe exacerbation in the past year.

Children aged 4 to 11 years, investigators note, were randomly assigned to either the lower-dose combination group or the albuterol-only group.

Based on a time-to-event analysis, the primary efficacy endpoint was the first experience of a severe asthma exacerbation in the intention-to-treat population.

The final randomized cohort numbered 3132 patients with 97% aged ≥12 years (183 aged 4 to <18 years). Mean age was approximately 49 years, two-thirds were women, and the majority were White.

Adverse events, according to the published study, were consistent with the known safety profiles of the individual components; the most common adverse events were nasopharyngitis, headache and upper respiratory tract infection.

“These data further strengthen the growing body of evidence around the value of as-needed anti-inflammatory treatment in asthma and support PT027’s potential to transform the current rescue treatment approach,” concluded Chipps, who is also past president of the American College of Allergy, Asthma & Immunology and is medical director of Capital Allergy & Respiratory Disease Center in Sacramento, CA. His statement was made in a press release from AstraZeneca. 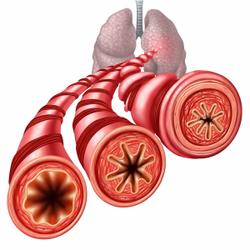