Risk for Diabetes in Older Women Reduced by 12% with 2000 Steps per Day: Study

Higher daily step counts by women aged ≥65 years was associated with reduced risk for incident diabetes, an effect that was modified by the level of stepping intensity.

"...if the average older adult were to take 2,000 more steps every day in addition to what they were already doing, they might expect a 12% reduction in diabetes risk,” said Alexis C. Garduno, MPH, an epidemiology doctoral student at the San Diego State University and University of California, San Diego (UCSD), in a UCSD press statement.

Garduno is the lead author of a recent study that found the more steps per day taken by women aged ≥65 years the greater the reduction in their risk for type 2 diabetes. Garduno and colleagues also found that walking at higher intensity was associated with even greater reductions in risk.Their findings were published in Diabetes Care

“We wanted to understand the extent to which stepping, or walking, is related to diabetes. And is [sic] 10,000 steps a day really necessary for people to reduce their risk for diabetes?” said senior author John Bellettiere, PhD, MPH, assistant professor of epidemiology at the Herbert Wertheim School of Public Health and Human Longevity Science at UCSD, in the statement.

A key figure from the study, the authors noted, was that for every 1000 steps taken per day, diabetes risk decreased by 6%. They wanted to know if there could be an ideal threshold of steps per day that could help prevent diabetes.

To investigate the possibility, Garduno and colleagues conducted a prospective cohort study of women aged ≥65 years who were free of physician-diagnosed diabetes at baseline enrollment in the Women’s Health Initiative Objective Physical Activity and Cardiovascular Health study.

Participants wore an accelerometer 24 hours/day for 1 week to measure all daily steps, ie, during exercise and routine activities of daily living. The ActiGraph GT3X+ accelerometers allowed measures of total, light-intensity, and moderate-to-vigorous intensity (MV-intenstity) steps taken per day. The investigators modeled adjusted change in the hazard rate (HR) for incident diabetes associated with daily total steps taken and steps taken at both light- and MV-intensity.

During a median follow-up period of 5.7 years, the authors report that 8.1% (395) of the women developed diabetes, a rate of 16.3 cases per 1000 patient years. Participants took an average of 3729 steps per day consisting of 1875 of light intensity and 1854 of M-V intensity. The researchers calculated that the greatest number of steps taken in 1 minute within a 30-minute period was 36.

“It’s important, even if you have staved off diabetes, to keep with it and to incorporate regular stepping as part of your daily schedule and make it into a routine,” said Garduno. “It’s not enough for somebody to go on a walk once a week. Our study indicates that regular stepping is indicative of lower diabetes risk in older adults.”

The regular stepping, however, noted Bellettiere, must be calibrated to age and particularly to mobility level. “For the average person aged 70 to 80 years old, just walking around the block one time is moderate to vigorous intensity activity,” he observed.

The authors note that determining a precise number of steps needed to reduce diabetes risk will require additional randomized controlled trials. Looking farther ahead, Garduno hopes the optimal step count might be calculated based on genetic risk or family history of diabetes and included in an individualized physical activity plan. 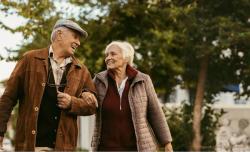