Rates of STIs among persons aged ≥60 years are increasing faster than among the general population. Can you speculate as to why?

According to research recently published by athenahealth, older adults (aged ≥60 years) represent the largest increase in in-office treatment of sexually transmitted infections. Between 2014 and 2017 the percent change in treatment rate per 100,000 people among the 60+ group was nearly 25%. For perspective, during the same 4-year period, the entire population aged ≥13 years saw an increase in treatment of STIs of 11%.

The trend among older adults is of concern given the natural waning of immunity and other age-related changes. What can primary care providers do? Focus a bit more attention on your older patients. And, find out how much you know with a short quiz.

2. According to research, roughly what percentage of men aged 70-79 years report using a condom during their last sexual encounter?

Answer: A. 0%. According to a 2010 study, 0% of men aged 70-79 years report using a condom during their last sexual encounter. Among men in other age groups, the percentages were2:

For women, reported use of a condom was:

Research is sparse on this issue, and more studies are needed to understand whether these percentages have changed in recent years. Various factors may explain lack of condom use among older adults:

3. Which of the following has most likely contributed to increasing rates of STIs among older adults in recentl years?

D. All of the above

Answer: D. All of the above. In recent years, rates of STDs have been steadily increasing among older adults. A recent analysis by athenahealth found that, among adults aged ≥60 years, rates of diagnosed herpes, gonorrhea, syphilis, hepatitis B, trichomoniasis and chlamydia rose by 23% between 2014 and 2017.3

Authors note several factors that may have contributed to the increase including availability of drugs like Viagra that have enabled older individuals to stay sexually active. Other factors include high-rates of mid-life divorce and increasing rates of online dating among older individuals. Waning immunity with age and inadequate safe sex education may also contribute.4

4. Approximately what percent of Americans living with diagnosed HIV are over age 50 years?

Answer: D. Approximately 50%. More than 50% of Americans living with diagnosed HIV are aged >50 years, according to 2016 data from the Centers for Disease Control.5 Aging of infected persons contribute to this high percentage, but new diagnoses are also common among older adults. In 2017, about 1 in 6 new HIV diagnoses were among people aged 50 and older. The CDC also reports that approximately half of persons aged >55 years who received an HIV diagnosis in 2015 had been living with HIV for 4.5 years before the diagnosis; this is the longest delay for any age group.5

5. For women, the risk of contracting an STD decreases with age.

Answer: B. False. For women, the risk of contracting an STD increases with age, and is related to biological factors. Decreasing estrogen levels after menopause can cause vaginal dryness and thinning, which can lead to microabrasions or tearing during intercourse that in turn increase the risk for STD transmission.  Older women are at increased risk for breast cancer, and treatment with aromatase inhibitors for breast cancer can further thin the vaginal endothelium.6,7 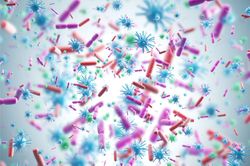