ATLANTA -- Varicella vaccine efficacy drops dramatically over time, according to surveillance data that contributed to the CDC's decision last year to recommend a booster.

ATLANTA, March 14 -- Varicella vaccine efficacy drops dramatically over time, according to surveillance data that contributed to the CDC's decision last year to recommend a booster.

In the surveillance data, children vaccinated five or more years earlier were 2.6 times more likely to have a moderate-to-severe breakthrough case of chickenpox than those who had been vaccinated more recently.

The breakthrough varicella rate eight years after vaccination was 12 times higher than in the first year after vaccination even accounting for changes in exposure, reported Sandra S. Chaves, M.D., M.Sc., of the CDC, and colleagues. in the March 15 issue of the New England Journal of Medicine.

Previous studies had been underpowered to demonstrate waning immunity and indicated a milder decline in efficacy, they wrote.

One case-control study published in the Journal of the American Medical Association in 2004 showed that efficacy fell only 13% in the first year after vaccination and then remained stable through eight years post-vaccination.

"Waning of immunity is of particular public health interest because it may result in increased susceptibility later in life, when the risk of severe complications may be greater than that in childhood," Dr. Chaves and colleagues wrote.

So, they followed children in Antelope Valley, Calif., near Los Angeles, for 10 years after the implementation of universal varicella vaccination in 1995. The active surveillance program encompassed a sentinel population of 350,000.

During this period, they identified 11,356 cases of varicella. Of these, 9.5% were breakthrough varicella, defined as onset of rash more than 42 days after vaccination.

To adequately control for exposure factors including age at onset and disease severity among vaccinated children, the investigators limited the analysis to children ages eight to 12. Those over age 12 may have received two doses.

In this age range, vaccination status was similar between genders and among ethnicities.

Children vaccinated five or more years prior had 2.60-fold higher odds of moderate-to-severe breakthrough varicella than those vaccinated less than five years prior (95% confidence interval 1.20 to 5.80, P=0.01) after adjustment for age at vaccination and calendar year.

Among children vaccinated between ages one and 12 years, the annual rate of breakthrough varicella increased with time since vaccination even adjusting for the same exposure factors. The researchers reported:

Interestingly, vaccination did appear to have shifted the incidence to older children, who are more likely to have moderate-to-severe cases. In 1995, about 73% of cases occurred among children ages six and younger with a peak frequency between ages six and nine. In 2004, only 30% of cases were among children age six and younger, and the peak occurred from ages nine to 12.

On the basis of these findings, in part, the CDC's Advisory Committee on Immunization Practices recommended last June that children between the ages of four and six years receive a second dose of varicella vaccine. The advisory panel also recommended a second catch-up dose for children, adolescents, and adults who had only received one dose.

These recommendations were incorporated into the American Academy of Pediatrics' immunization schedule as well. The academy recommends the first varicella dose be administered at age 12 to 15 months.

However, Dr. Chaves and colleagues noted, "No long-term data are available on the duration of immunity afforded by the second dose of vaccine." 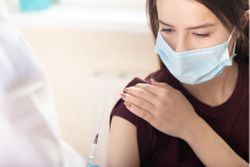