Patients with late-onset asthma and elevations in common biomarkers of inflammation may be at greatest risk for exacerbation-prone asthma while those with early-onset disease and similar biomarker elevations have the poorest lung function, according to results of a new study being presented at the upcoming American Thoracic Society International Conference, being held virtually May 14-19, 2021.

Type-2 inflammation has emerged as an important element in asthma phenotyping and research supports differences by age at onset as another. Plasma Il-6 level is a strong predictor of both asthma exacerbations and poorer lung function. Only partially understood, however, is the intersection of IL-6 with type-2 inflammation which the authors hypothesized would identify a high-risk asthma phenotype when found in a patient with late-onset disease.

Groups were identified as early- vs Iate-onset, T2 Lo, T2 Intermediate or T2 Hi (0, 1 or 2 T2 biomarker elevations), and each of these groups further defined by IL-6 Hi vs IL-6 Lo.

Exacerbations were defined as a corticosteroid burst of ≥3 days, an ED visit, or hospitalization.

Twelve asthma phenotypes were identified, ranging in size from 13 to 44 participants. IL-6 levels did not vary by IL-6 Hi subgroup.

In contrast, FEV1% predicted was generally lower in the 6 IL-6 Hi groups, but lowest in the group of early-onset T2 Hi/IL-6 Hi.

Sputum eosinophils were highest in the 4 T2 Hi groups but tended to be lower in T2-Hi/IL-6 Hi vs the IL-6 Lo groups.

Total IgE levels tended to be higher, with higher T2 and IL-6 Hi groups, despite their older age. In contrast, specific IgE tests were higher in early-onset asthma with no apparent impact by IL-6 and minimally by T2 phenotype.

The authors note that stratifying asthma patients using “4 simple metrics” identifies distinct asthma phenotypes that may benefit from different approaches to treatment such as strengthened prevention efforts in phenotypes at higher risk of dangerous exacerbations (late onset, elevated inflammatory biomarkers) and a focus on medication adjustment and adherence monitoring in those with poor lung function (early onset, elevated biomarkers.) 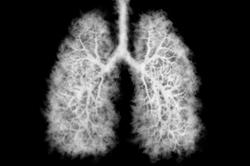