A Tale of Two Cities

It was the best of times, it was the worst of times. At least that’s how I recall how Charles Dickens begins his story of the civil and personal turmoil during the French Revolution. The United States is in the midst of our own tale of two cities, but the two cities are one, because it’s the tale of two Washingtons. Traveling often to DC, as I did for a number of years, and coming from what we of the western states like to call “the real Washington,” I am used to two Washingtons. But the Sunday, March 15 Washington Post headline reporting current HIV realities in our nation’s capital affirms that there are indeed two cities in one contiguous space.1 And it is not a pretty sight.

THE CITY OF HOPE
The nation’s eyes are on the city that was filled with smiling, hopeful people on Inauguration Day. They were celebrating a change of government, which promises to correct 8 years of policies that have led to loss of friends and face around the globe, a vanishing middle class at home, and an economy rapidly falling toward some unknown bottom. Early policy changes support this hope: the release of federal dollars for stem cell research, a return to low-cost family planning pharmaceuticals, the naming of experienced professionals to key federal positions. The pace is fast, although there are those who continue to believe that a new president can work miracles overnight and are disappointed.

This hopeful Washington is populated by thousands of bright professionals who have come to staff congressional offices, clerk at the Supreme Court, and work in the new administration. This city includes those who are just launching careers, those who come in to make change work, and those who have committed to a professional life as members of the civil service, carrying out the policies our elected leadership directs. Many of these professionals, especially those who have families to educate and support, chose to work in Washington but live outside the city limits, for reasons of cost and quality of life.

As has been suggested to Policy Watch readers a number of times, there are many more steps to be taken to respond to our national needs than an election and a few bills or new policy positions. Additional steps include more funding for creative, targeted messages about prevention and care; a method to pay for comprehensive care for everyone; and a social compact that is inclusive rather than exclusive. But only the extremely naive could have thought that a new administration could accomplish all of those goals within months, or even during the first year of arrival.

THE OTHER WASHINGTON
The city we often forget is the residential Washington. Not the Georgetown town houses, or the high-end apartments up Connecticut Avenue, or the trendy areas scattered near the Capitol or around DuPont Circle. The other Washington is row upon row of once proud houses now leaning on one another behind chain-link fences and public housing projects, which are in need of an extreme makeover. It’s a Washington with an expensive school system that appears not to educate, hundreds of workers with no work, and a health system that does not lead to health.

This other Washington is the “real” Washington to its disenfranchised permanent residents-those who have not had access to a quality education, who do not find employment that is meaningful, who do not have access to disease prevention or treatment as needed, who are not allowed by Congress to make their own decisions about how to spend their urban budget.

This other Washington is the one with a rate of HIV infection that resembles that of many parts of Africa. This epidemic is kept going because of transmission of all kinds: men having sex with men, men and women having sex with each other, and drug use. All of these have been well-known routes of transmission for 20 years, and all of them can be reduced through effective prevention and treatment programs; yet, in the district that houses the heart of our nation, we fail miserably. The rate of HIV infection, based on actual testing, has increased by 22% since 2006 and is only below 1% of the population in the far western part of the District and below 1% among Hispanic and white women. The highest reported rate of HIV infection is among black men, estimated at 6.5%-an appalling statistic that is a national shame (and the actual number is likely even higher). Additional facts and analyses are available in 2 reports released on March 16: District of Columbia HIV/AIDS Epidemiology Update 2008 (available at http://www.dchealth.dc.gov/doh/frames.asp?doc=/doh/lib/doh/pdf/dc_hiv-aids_2008_updatereport.pdf) and Heterosexual Relationships and HIV in Washington, DC (available at http://www.dchealth.dc.gov/doh/frames.asp?doc=/doh/lib/doh/pdf/dc_hiv_heterosexualstudy.pdf).

Even though they document some successes, such as a dramatic drop in the number of children born HIV-positive and a marked increase in HIV testing, these reports provide a bleak picture of this second Washington.

GOING FORWARD
The above-mentioned reports are not able to predict the longer-term impact of a more energetic testing program, which is expected to be positive because testing is usually accompanied by prevention education, and needle exchange, which is now legal. Expectations should be tempered by the depressing information that is based on interviews of men and women who are in high-risk social networks but are not yet infected. In the areas with the highest rates of HIV infection, 60% of those interviewed earn less than $10,000 a year and 43% are unemployed. Only 30% reported using a condom the last time they had sex and many had overlapping sexual partners-sure ways to continue the spread of disease.

What all of this indicates is that simply throwing money at HIV programs is not going to be sufficient. Stability in leadership would also help: the current District HIV director is the third in the past 5 years and the 12th since DC established its pioneering HIV office in 1986. It would be very helpful to have HIV prevention and treatment programs in DC fully funded and to have quality health and illness services available to all. Finally, as in many parts of the developing world, the residents of DC need education and employment so that they can have more than hope. 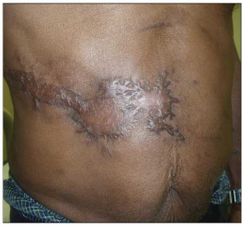 Keloid After Herpes Zoster in an HIV-Infected Person