A 5-year-old boy was referredfor evaluation of afemur fracture. A day earlier(while his mother was atwork), the boy had jumpedoff the back of his father’spickup truck, which wasparked in the driveway. Theboy’s older and youngerbrothers were present andreported the incident to thefather. The father found the childsitting on the ground; the child toldhis father that his leg hurt and thathe wanted to go to sleep. Apparently, the father putthe child to bed. The mother reported that on the morningof admission, the child was wearing the sameclothes as when she had left for work the previous day.The child could not walk, although he was able to bearsome weight; his mother brought him to the hospital.There was no other history of acute trauma involvinghis leg.

THE CASE: A 5-year-old boy was referred for evaluation of a femur fracture. A day earlier (while his mother was at work), the boy had jumped off the back of his father’s pickup truck, which was parked in the driveway. The boy’s older and younger brothers were present and reported the incident to the father. The father found the child sitting on the ground; the child told his father that his leg hurt and that he wanted to go to sleep. Apparently, the father put the child to bed.

The mother reported that on the morning of admission, the child was wearing the same clothes as when she had left for work the previous day. The child could not walk, although he was able to bear some weight; his mother brought him to the hospital. There was no other history of acute trauma involving his leg. The child had several bruises on his face, arms, and back that, according to his mother, came from fighting with his brothers. The mother also reported that the boy had incurred a scalp laceration a week earlier. There was a distant history of a “broken leg” sustained while the boy was being cared for by relatives and was living out of the country.

There is little medical history of illness and no family history of easy bone fracturability. The boy’s vital signs were stable. He did not have blue sclera. Oral examination revealed some caries but normal teeth.

The patient was quiet and not distressed, but was anxious and cried when his right leg was moved. He had sutures in place over the scalp laceration. He also had numerous linear forehead scars and circular bruises on both sides of the cheek, chin, and behind his left ear. In addition, he had extensive purple-red lesions nearly the length of his back with scarring. His mother reported that these had been present for some months. There were several bruises on both arms, including a 4 X 3-cm circular lesion on his left forearm consistent with the shape of a bite mark. He also had bruises on the backs of both thighs and linear bruises on the left upper thigh. However, he did not have a preponderance of bruises in typical locations, such as the shins, knees, and elbows  His right leg was swollen and tender, with discomfort on motion. His left leg showed no obvious deformity.

The patient’s hemoglobin level was 11.7 g/dL; hemhematocrit was 34%, with a platelet count of 335,000/μL. Coagulation tests were normal; prothrombin time, partial thromboplastin time, and fibrinogen levels were normal, as were levels of calcium and amylase. Aspar-atate aminotransferase (AST) and alanine aminotransferase (ALT) levels were slightly elevated (AST, 119 U/L; ALT, 65 U/L).

Roentgenograms showed a spiral fracture through the midshaft of the right femur that appeared to have gone through an older fracture. There was a remote fracture of the right acetabulum and deformity of the right femoral epiphysis. It was thought that the current femur fracture could be consistent with a fall that was described by the mother. The distribution and location of the child’s multiple bruises raised the suspicion of abuse.

A skeletal survey revealed that the right and left humeri had irregularities of the metaphyses. Both distal humeri appeared to have old supracondylar fractures. The capitellum of the right humerus appeared larger than the left, which suggested remote trauma. There was some decreased height of the L3, L4, and L5 vertebrae. Bone mineralization appeared to be normal, but the unusual location and multiplicity of healing fractures raised the possibility of an underlying metabolic abnormality.

The child did not speak English; thus, a translator was requested to speak directly to the child. He did not disclose any abuse initially. However, the mother admitted to pinching and pushing him when he misbehaved. The bite mark was probably inflicted by one of his brothers.

A genetics consultation was obtained because of the unusual pattern of previous fractures and because his current fracture occurred through an old fracture. A skin biopsy specimen was obtained and sent for collagen analysis. Pending results, the child was placed in foster care. He was treated with closed reduction and placed in a hip spica cast for 4 weeks. The boy subsequently refractured his leg while still in foster care while he was sliding down a slide, catching his foot. There were no additional unusual bruises sustained while the boy was in foster care. The bruising on his back also cleared within a week.

Has this child been abused- or is there a medical explanation for the physical findings?

DISCUSSION: The biopsy specimen demonstrated an abnormality in the secretion of procollagen I, which is consistent with a diagnosis of osteogenesis imperfecta (OI) type I. OI type I is a dominantly inherited disorder with relatively little variability in expression.1 The major findings are bone fragility, blue sclera (which this child did not have), and-in about half of those affected-early-onset hearing loss. Some children bruise easily as a result of abnormal collagen in blood vessels. Dentinogenesis imperfecta is rare: most affected persons are of normal height, and deformities are uncommon.

Child abuse and OI appear to coexist as separate diagnoses in this case. Abnormal bone strength caused by OI explains the previous fractures- and most likely the current one. It is notable that the child abuse specialist thought that the spiral femur fracture alone could have been caused by a fall described by the parent. Spiral fractures alone are not diagnostic of abuse; they are seen in accidental injuries, as well as in children with abnormal bones. The bruising in unusual locations and patterns raised the greatest suspicion of inflicted injury. It was believed that because this child did not have excessive bruises in “typical” locations, the abusive bruises he suffered would have resulted from more than minor trauma. Also, older fractures combined with a vague or unknown history of specific incidents raised the concern of abuse causing all of the injuries.

Skeletal surveys are not typically recommended in a 5-year-old with fractures but, in this case, the survey facilitated the diagnosis of OI.

This case also raises the question of when an evaluation for OI should be done in children who present with multiple fractures. Child abuse is very common, but osteogenesis imperfecta is rare. A recent article by Marlowe and colleagues3 suggests that collagen testing may identify a small group of children with suspected nonaccidental injury who do not have clinical indicators of OI.

The unusual pattern of fractures initially was of concern. In addition, a new fracture with minimal trauma raised the possibility of metabolic or hereditary bone disease. Bone density was assessed as normal, although x-ray films may not be an accurate method of determining low bone density, as in our case. When present, however, OI must be a consideration along with other diseases that can result in osteopenia).

The child went into custody with a relative. His bruises healed well and, at follow-up, the extensive back bruising that his mother indicated had been there for a long time also had completely resolved. He is undergoing reconstructive surgery to rebuild his acetabulum and femoral head and is doing well. 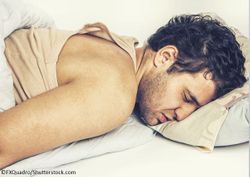