The Food and Drug Administration today approved sonidegib (Odomzo) for treatment of locally advanced basal cell carcinoma (BCC), the second member of the hedgehog inhibitor class to receive the indication.

Supporting evidence for the approval application included results of a randomized, phase II clinical trial that showed response rates as high as 58% among patients with locally advanced BCC treated with sonidegib. Responses proved durable in many cases.

"Our increasing understanding of molecular pathways involved in cancer has led to approvals of many oncology drugs in difficult-to-treat diseases for which few therapeutic options previously existed," Richard Pazdur, MD, director of the FDA Office of Hematology and Oncology Products, said in a statement. "Thanks to a better understanding of the Hedgehog pathway, the FDA has now approved two drugs for the treatment of basal cell carcinoma just in the last 3 years."

Labeling for sonidegib will include a boxed warning about a potential for fetal death or severe birth defects in developing fetuses of women treated with sonidegib during pregnancy.

Labeling for sonidegib will include a boxed warning about a potential for fetal death or severe birth defects in developing fetuses of women treated with sonidegib during pregnancy.

In 2012 the agency approved vismodegib (Erivedge) for locally advanced and metastatic BCC. BCC accounts for about 80% of nonmelanoma skin cancers. Locally advanced BCC pertains to lesions that have not metastasized but that cannot be treated surgically or with radiation therapy.

The pivotal phase II trial of sonidegib included 66 patients treated with 200 mg once daily (the approved dose) for 12 months and 128 patients who received sonidegib 800 mg daily. Patients in the 200-mg group had an objective response rate of 58%, consisting of three (5%) complete responses and 35 (53%) partial responses.

The complete response rate increased to 20% in a prespecified analysis of an alternative definition of complete response (partial response or better by MRI or photography and no evidence of tumor on biopsy of residual lesion).

According to a statement from sonidegib manufacturer Novartis, 31 of 38 responding patients have ongoing responses of 1.9 to 18.6 months' duration, and the median duration of response has yet to be reached. According to the FDA, half of the responses have persisted for 6 months or longer.

Response rates with sonidegib 800 mg were similar to those seen with 200 mg, but came with higher rates of adverse events.

Quick Tick Quiz: Can You Spot the Fever? 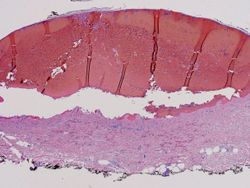