Can You Identify These Facial Findings?

A 24-year-old African American man presents for a routine eye examination. Theocular findings are unremarkable; however, well-circumscribed areas of whitenedskin are noted on his forehead and hands (A and B). The patient reportsthat the patchy loss of pigment has been progressing over a number of years.

A 24-year-old African American man presents for a routine eye examination. Theocular findings are unremarkable; however, well-circumscribed areas of whitenedskin are noted on his forehead and hands (

). The patient reportsthat the patchy loss of pigment has been progressing over a number of years.What is the likely cause of the depigmentation?

Several months earlier, an 80-year-old woman with a history of mild dementiaunderwent a partial lateral tarsorrhaphy to ameliorate severe dryness of theeyes. The patient lives in a nursing home.Recently, the patient's daughter has noticed ulcerated lesions on her mother'sface. The eyebrow area, the maxilla, and the area immediately beneath theright nostril are affected. Patches of dermatitis surround the sharply demarcatedulcerations. No cellulitis is present. The daughter comments that her motherseems to pick unconsciously at the lesions.What is responsible for these ulcers?

Cutaneous Abnormalities of the Eyelidand Face.

may beginas local injury, infection, or dermatosis; in time, an irresistibleurge to repeatedly abrade the wounds develops.Staff members at the nursing home where the patient livesobserved that she started picking at her facial skin aftershe had undergone the partial lateral tarsorrhaphy. Despiterepeated admonitions, the patient continued the practiceand was seemingly unaware of what she was doing.Dermatitis artefacta--a condition in which the patientis unaware of his or her self-mutilation--has been associatedwith a wide range of psychopathology, including depression,psychotic disorders, and personality disorders; or malingering.Neurotic excoriations that are acknowledged bythe patient are also associated with psychiatric disorders,such as obsessive-compulsive disorder, depression, andother mild personality disorders.

Patients may require counseling or psychiatric intervention.Psychotropic medication may be indicated for patientswith borderline personality disorder.

The staff of the nursing home where this patient residedclosely monitored her condition. A topical antibioticointment was applied to the lesions, and the patient's fingernailswere kept trimmed. After about 4 to 6 weeks, the lesions healed, and the patient stopped herdamaging behavior.

An enlarging vascular lesion on the face of their 7-month-old daughter promptsthe parents to seek medical attention. The lesion is localized to the upper lipand mucosa.What treatment will you recommend?

This child has a

Althoughthese lesions often affect cutaneous surfaces of the head and neck, they alsomay involve the mucosa, as in this patient. About half of the children with amucosal hemangioma also have an associated cutaneous lesion.

These benign vascular tumors may be present at birth or can developshortly thereafter. They commonly undergo a rapid growth phase followed bygradual spontaneous involution. Therapeutic options include surgical excision,corticosteroid injections, or daily subcutaneous interferon. Because spontaneousinvolution is the norm, observation is the most prudent initial approach.This patient's hemangioma is being observed. More aggressive interventionmay be considered if the child's ability to obtain adequate nutrition iscompromised.

Cutaneous Abnormalities of the Eyelid and Face.

This lesionwas an unusual presentation of squamouscell carcinoma; most of theseneoplasms appear as an erythematous,crusted, well-demarcated, patchylesion with irregular borders. Evidenceof chronic sun exposure andother actinic damage is common; thered spots on and near this patient'sear are additional signs of solar injury.Squamous cell carcinomas thatarise from actinic keratoses appear tohave a more favorable prognosis;these cancers are more likely to be insitu and less likely to metastasizethan other squamous cell neoplasms.

Involuted, atrophied, scarred, anddepigmented lesions are noted on theface of a 67-year-old woman whopresents for a blepharoplasty. She attemptedto conceal the lesions withliquid makeup (

).To what do you attribute theselesions?

Examination of a 78-year-old man'schronically tearing left eye reveals thatan ectropic lower eyelid is the causeof the epiphora. A dark brown-black,plaquelike lesion that appears to bestuck onto the surface of the left malarskin is an incidental finding.Do you suspect that the lesionon the cheek is malignant?

This patient has a long-standinghistory of

The patient has a

which is also called a basalcell papilloma or a seborrheic wart.

This common benign growth appears onthe face, neck, and trunk of middle-aged and elderly persons. The usuallyround or oval lesion can vary in color from tan to black; the surface is friableand verrucous and features numerous grooves.Treatment options range from observation to surgical excision for cosmeticreasons. Cryoablation, curettage, and electrodesiccation are also effective.A lateral canthal strengthening procedure corrected this patient's ectropiceyelid and resolved the tearing problem. The seborrheic keratosis is beingmonitored and may be excised if it enlarges.

Atlas of Eyelid and Conjunctival Tumors. 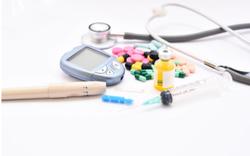 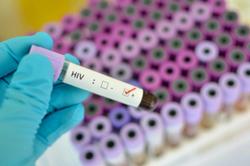