Fad diets can be traced all the way back to 35 000 BC. Find out how much you know about which ones worked or didn't work with our 10-question quiz.

Fad diets have come out in full force in recent years, but their origins in medical thought and practice extend back to ancient times. Take this brief quiz to test your knowledge of the dietary health and weight loss schemes that worked-and didn’t work- through the ages.

Question 1. In the earliest depiction of the human form, an artifact dating back to 35 000 BC, a woman portrayed as being voluptuous was what?

Answer: B. Obese. The first depiction of the human form can be dated back to an artifact from 35 000 BC which portrayed an obese woman as voluptuous.1

Answer: A. Garlic. Hippocrates made garlic a big part of his therapeutic armamentarium and many believed it could help with fertility and night blindness.2

Question 3. In the first centuries AD, many Christians, including saints, suffered from which eating disorder?

Answer: C. Anorexia mirabilis. Also called holy anorexia, this disorder became common because Christians believed that the physical body was the enemy of the soul. Many restricted their food intake, and some starved themselves, to achieve a holier state.3

Question 4. William the Conqueror instituted a fad diet in the 11th century when he became overweight and went on a regimen of almost nothing but what?

Answer: B. Alcohol. William the Conqueror, or “King of the Liquid Diet,” stopped eating foods and consumed only liquor in perhaps the world’s first liquid diet, one that ultimately was unsuccessful.3

Question 5. In 1558, overweight Italian nobleman Luigi Cornaro wrote about his successful “Immortality Diet” and then lived to what age?

Answer: D. 102. In the first actual diet book, The Art of Living Long, Cornaro described his diet of just 12 oz of food and 14 oz of wine per day and advised others to do the same. By living until the age of 102, he lent credence to the diet’s nickname.3,4

Answer: D. Move away from the swamp. Short revealed his profound, yet simple, Avoiding Swamps Diet in The Causes and Effects of Corpulence.5

Question 7. In 1864, overweight undertaker William Banting published a diet book that was so popular the term “I am banting” became famous for what meaning?

Answer: C. "I am on a diet." In the book, Letter on Corpulence, Banting described the ailments he attributed to his former fatness and his dietary tips were to abstain from or greatly reduce consumption of bread, butter, milk, sugar, beer, and potatoes and eat mostly meat, vegetables, and wine.3

Question 8. Which of the above were popular 20th century fad diets?

Answer: E. All of the above. The Grapefruit Diet,Lemonade Diet, Cabbage Soup Diet, and the Tapeworm Diet are all popular fad diets from the 20th century.4

Question 9. The currently popular Paleo Diet is most reminiscent of the original caveman diet in what respect?

Answer: B. Emphasis on eating whole, unprocessed foods. The Paleo Diet has brought dieting full circle with a return to eating lean meats, fish, fruits, vegetables, nuts, and seeds-natural foods that were obtained through hunting and gathering thousands of years ago.6

Question 10. True or false? US News rated the Ketogenic Diet the best overall diet and Weight Watchers® the best for weight loss for 2019.

For more information on all questions and answers, please visit To Eat or Not to Eat: A Brief History of Dieting. 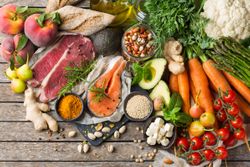 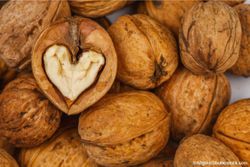 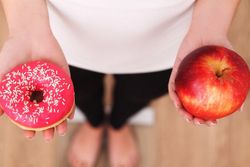 Is America Eating Healthier? Yes, but More Work is Needed