Hemoptysis, Hoarseness, and Dyspnea in an Older Man

A 61-year-old man with an 80 pack-year smoking history and a past medical history of arthritis presented with hoarseness, dyspnea, and cough productive of blood-streaked sputum, all of several weeks’ duration. Findings from the physical examination were unremarkable.

The patient underwent bronchoscopy, which revealed a 1-cm lesion on the vocal cords (Figure 1). The mass was mobile with respiration and showed evidence of bleeding when it was touched with the bronchoscope. The lesion was excised using microlaryngoscopic technique with general anesthesia. No difficulty was encountered during dissection of the lesion; bleeding was minimal and was controlled by cauterization. The patient had no complications after the procedure and was discharged on the first postoperative day. Histopathologic examination of the specimen indicated a hemangioma.

Discussion
Sixty-five percent of hemangiomas arise from the head and neck region. It is the most common benign tumor found in this area. These tumors are much more common in children than in adults. In children, hemangiomas are usually seen in the parotid gland, tongue, or larynx.  While hemangiomas of any kind are seen infrequently in adults, vocal cord hemangiomas in particular are rare. Patients occasionally report blood-streaked sputum, as our patient did and may present with dyspnea and hoarseness, also seen in our patient.

Risk factors for laryngeal hemangiomas are vocal abuse, cigarette smoking, and laryngeal trauma. Factors that influence the choice of therapy are the patient’s age and the type, size, and location of the tumor. 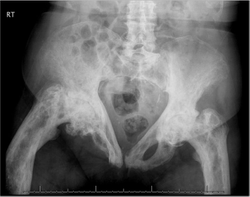 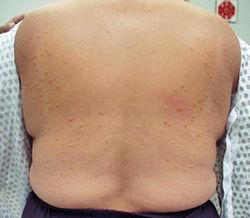 Do “Yellow Bumps All Over” Spell Diabetes? 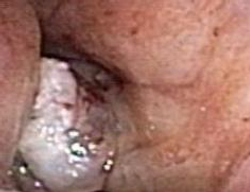