Papillary Cystic Neoplasm of the Pancreas

A 24-year-old woman was concerned about a protruding epigastrium mass that had grown since it was first noted 4 months earlier. She had no abdominal pain, nausea, or vomiting.

A 24-year-old woman was concerned about a protruding epigastrium mass that had grown since it was first noted 4 months earlier. She had no abdominal pain, nausea, or vomiting.

A large, firm, tender mass was palpated in the patient's left upper quadrant. All laboratory test results were within normal limits. An abdominal CT scan showed a 15- to 20-cm, cystic and solid tumor, which most likely arose from the body and tail of the pancreas (A).

The patient underwent exploratory laparotomy and distal pancreatectomy; a 17 × 13 × 4.5-cm mass was removed (a cross section of the tumor is pictured [B]). The tumor was well demarcated from the remaining pancreas and surrounding organs. Microscopic examination of the mass revealed large areas of necrosis, which led to the accumulation of 250 mL of sanguineous, thick fluid derived from necrotic tissue and intratumoral hemorrhage. The mass was diagnosed as a papillary cystic tumor of the pancreas.

Drs Hesham M. Taha, Gamil Kostandy, David Dosik, and H. Hedayatti of the New York Methodist Hospital, Brooklyn, explain that papillary cystic tumors of the pancreas occur rarely. Studies have shown that these tumors arise predominently in women who are younger than 35. Although the sex and age distributions appear to point to a genetic or hormonal pathogenesis, no association with endocrine disturbances (particularly estrogen or progesterone overproduction) has been reported.

Surgical excision is the treatment of choice. Therapeutic options are unclear if a tumor is unresectable or has metastasized to the liver; some studies have shown partial responses to radiotherapy or chemoembolization.

CGM vs SMBG in Primary Care: What Does the T2D Evidence Say? 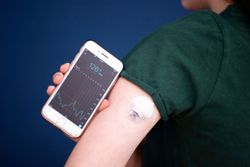